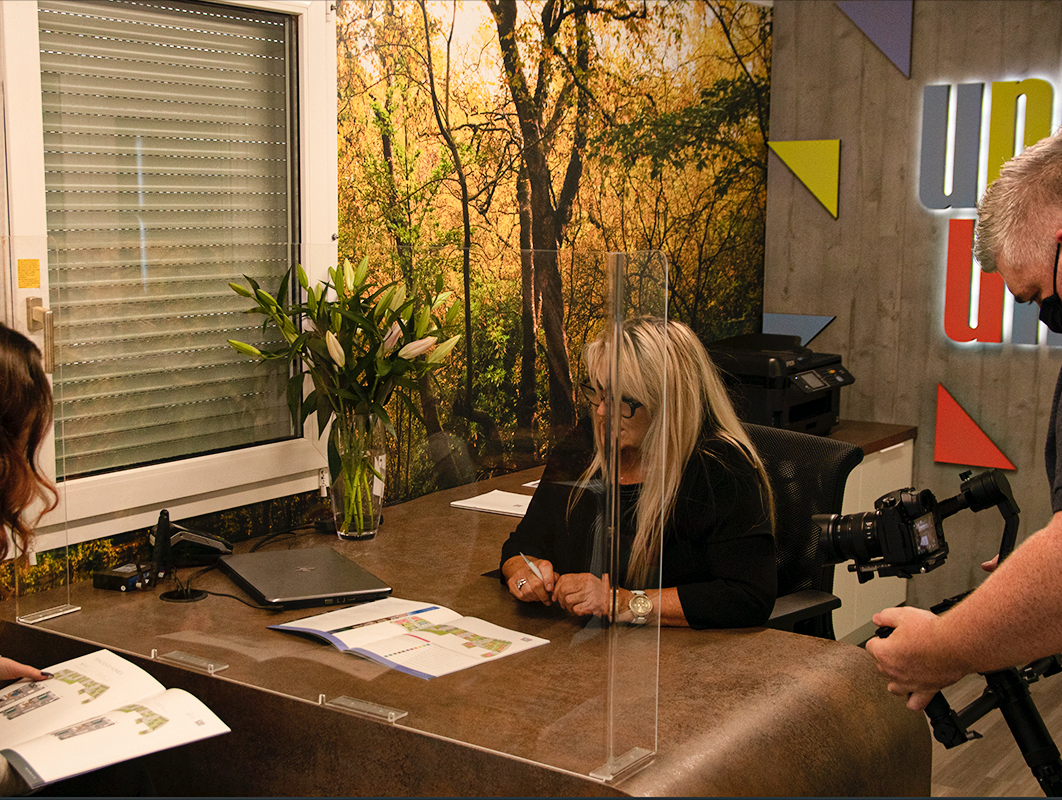 Uncategorised
by Alison Allan
No comment(s)

Here at Urban Union we have ramped up activity on our newest site in Scotland with the launch of our sales cabin at Pollokshaws Living.

The site, in the southside of the city, officially launched earlier this year and found immediate success with huge demand for the homes on offer.

Now, we have taken up permanent residence on the site, allowing interested buyers to meet with sales representative Amanda to learn more about the development. Earlier this week we took some footage of the new promotional video being made, which will be shared across social media.

Suited to first time buyers and growing families, there is a range of house types available at Pollokshaws Living including one and two bedroom apartments as well as two, three, four and five bedroom terraced homes.

Prices range from £160,000 to £300,000 and a large proportion of homes are eligible for the First Home Fund (which will reopen for applications in early 2021) and the Help to Buy (Scotland) scheme which runs until March 2022, enabling first time buyers to purchase their home with just a five per cent deposit.

“We have been working hard at Pollokshaws Living over the last few months, with construction work getting underway after the recent lockdown. We’re really pleased to launch our sales cabin which will be the first port of call for people interested in moving to the regenerated community we are contributing to.

“There was huge demand for the first batch of homes we released earlier in the year, and we expect that to continue in the months ahead. We will be operating an appointment-only system at the sales cabin to help protect both staff and visitors, so would encourage people to get in touch should they want to learn more.”

Set to complete in 2023, Pollokshaws Living is part of the wider Transforming Communities: Glasgow programme which aims to provide sustainable mixed tenure communities through the provision of new housing, community facilities, green space and, where appropriate, commercial units.

Located in a highly sought-after area in the southside of Glasgow, the development is within an easy commute of the city centre. Pollokshaws West train station is very close to the development, while the M77 motorway is within a five-minute drive, as is Silverburn Shopping Centre.

The development is next to Pollok Park, which provides the perfect escape from city life. In addition, there are a range of nearby supermarkets including Morrisons and Lidl, while nearby Shawlands has a host of bars, restaurants, independent shops, boutiques and health and sports facilities.

“These new homes will be key to the regeneration of Pollokshaws, an area that offers so much, being so close to Pollok Park, fantastic transport links and great shopping. I am sure that the regeneration of the area will now go from strength to strength.”

Urban Union has a strong track record in delivering affordable housing, with its Laurieston Living development in the Gorbals area of the city winning multiple awards.

Find out more about Pollokshaws Living